The south-central region of western Noefra, south of the Windwalker Confederacy and bordering Byssia to the west and the Jungle of Fangs to the east, the Blood-thirst Wildlands are not claimed by any single nation and are considered hostile terrain. Home to a wide variety of races, tribes, and strange beasts, the wildlands are a dangerous place about which very little is known.

Not much is known about this area. It seems to have been substantially different during the Old Western Empire--surviving maps and records from before the War of Souls show a completely different landscape. Whether that landscape was destroyed during that war, cut off from reality, or simply altered into the current territory is unknown. What is known is that the incidence rate of re-appearance of Imperial-era ruins, structures (some still operational) and other such phenomena is much higher as you move further south than in more settled lands.

During the reconstruction era (from the end of the War of Souls until the Cataclysm), this region was considered uninhabited and unknown. Covered in thick jungle, it held a dangerous allure for adventurers and explorers and claimed many lives. What is known is that there once was a large temple to an unknown goddess located near the center of the wildlands. This temple was the home of the Left Eye of Qa'desh for many centuries, until the Divine Three retrieved it just hours before the Cataclysm. That event drained the anima out of much of the continent and the effect was worse near the epicenter of the blast. All life within 50-60 miles of the temple withered and crumbled to dust and much of the rock crumbled to colorless sand. According to the Catalysts, even 200 years later there was still a ~10 mile band of blasted lands (although the temple itself still remained intact somehow).

Life returned to the wildlands slowly. About 60 years ago (roughly 190 AC), the demon prince known as the Twisted sent a major mkhulu agent into the heart of the wildlands. It established a lair in the ruins of the temple and began a slow ritual that corrupted life starting from that point. As it gathered allies and power, it sent out parties to conduct twisted rituals at the edges of the tainted area to accelerate the process. The inhabitants (mostly goblinoids) fled as best they could northward away from the corruption, but many were left behind. Those that escaped are now part of the Windwalker Confederacy; those that remained were twisted by the fell magics. As the corrupted area grew, the druids of Byssia began fighting back, but were fighting a losing battle.

In 205 AC, the Catalysts, drawn by rumors of growing corruption, found one of the ritual sites. They then sought out the [[Byssia]n druids and received from them a ritual weapon of great power, capable of conjuring large chunks of stone to bombard the enemy from a great distance. With the help of avatars of Yogg-Maggus, Pinwheel, and the Hollow King, they completed the ritual (fighting off a partial appearance of the Twisted in the process). Hastening south, they defeated the [[Twisted]'s agents and stopped the encroaching corruption. Since then, the area has been mostly left wild. Pockets of corruption still remain, but most of it has been cleansed by Quartus itself (as with most abyssal influence in the absence of active demonic presence).

Recently, the Serpent Dominion and Asai'ka have begun expanding into the eastern portions of the wildlands on the shore of the Serpent Sea. So far, they've not gotten past the borders very far.

The northern region (nearer to Fort Hope) is known to be inhabited by goblinoid tribes, some of which still bear significant abyssal taint. These should be considered unfriendly at best and treated with extreme caution.

There are reports of fish-people along the southern edge near the Primal Sea, and explorers from the Serpent Dominion have encountered other aquatic and amphibian species. Unconfirmed reports of rampant fey and therianthrope bands have also been made.

The most well-known danger are the pockets of abyssal taint and the twisted wildlife that they cause. Wildlife exhibiting strange mutations or behaviors should be destroyed ASAP, lest it taint other creatures. The Sages have put a small bounty on substantial and confirmed reports on such wildlife. 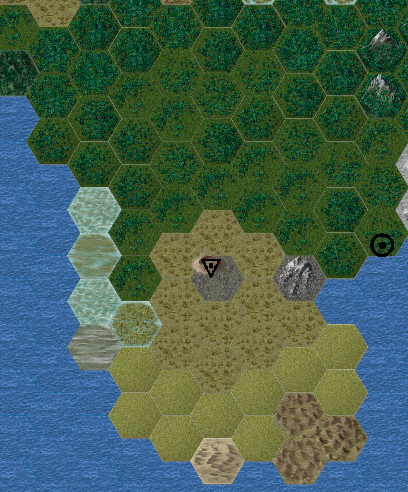