The most ancient continuously-inhabited city in the eastern portion of the Federated Nations, Fuar Uulan was the ancestral clan-hold of the Uulan clan before the Cataclysm (and for centuries before that). The Fuar clan joined them soon before the Cataclysm, making the city Fuar Uulan. In the wake of the Cataclysm, when the surviving dwarven clans (led by clan Alkh) made their way south, they were taken in by their relatives, and the city grew tremendously (and many daughter clan-holds were formed in those mountains). Fuar Uulan joined the newly-formed Council Lands as the second city after Kaelthia.

Fuar Uulan remained the traditional and religious center of dwarven life in the Council Lands until the end of the Council in 227 AC, although much of the commercial life moved to Kaelthia to escape the stifling traditionalism of the underground city. A good chunk of the disaffected, non-traditional dwarves went north to Shinevog in the last decade or so of the Council as well. With the civil war that erupted after the Guildmasters plot, Fuar Uulan and the rest of the dwarven community in the Outer Barrier Range pulled in their horns, ejected most of the non-dwarven populace, and shut their gates (as dwarves are so wont to do when troubles arise outside). They remained mostly untouched by the civil war, although a few clans broke away and joined different sides.

In the Treaty of Rauviz that ended the war, Fuar Uulan was made the capital of the Uulan Confederacy, a position it has retained in the 20 years since that event. Compared to most of the capital cities, it is somewhat sleepy and small--non-dwarves are allowed inside but are generally not made welcome. 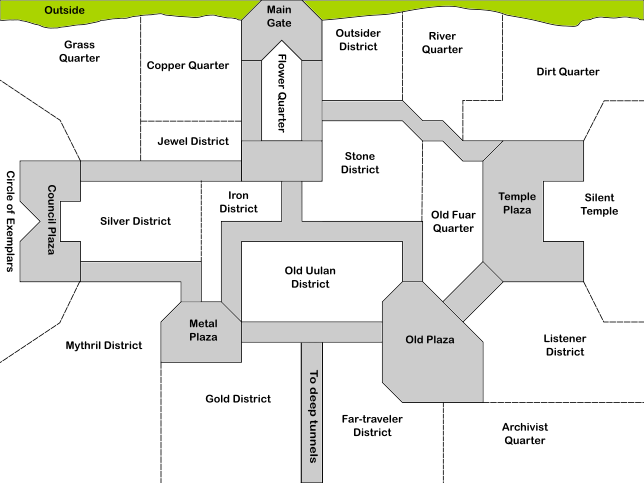 Fuar Uulan resides entirely within Mount Uul, one of the larger peaks in the Outer Barrier Range. Areas in grey are primary tunnels, smaller tunnels are not marked. Dashed lines separate districts.