The playable races of the setting are (sub-races are included unless specifically excluded):

Humans4
PHB variant not allowed. Most common race by far. Major populations exist in all nations except Wyrmhold.

Dwarves
Common in the Holy Kaelthian Republic, Shinevog, and Zhapai Karmap. Uncommon but not unknown in the Serpent Dominion. Rare otherwise.

Elves
Puun Ihmisia (wood elves) are common in Byssia, the Duarchy, and Zhapai Karmap. Gwerin (high elves) are only common in the Crisial Kingdom. Second note: wood elven and high elven are different languages. Choose one if you choose Elven as a language.

Halflings
Only common in the Holy Kaelthian Republic, but present in the Crisial Kingdom and the Sha'slar Autonomous Zone as well, especially in agricultural areas. Rare. Strongly matriarchal society--men are comparatively rare.

Half-elves4
Common in Byssia and all 3 of the nations of the former Stone Throne. Present in all 5 of the Council Lands Successor States but not common.

Half-orcs4
Full-blooded orcs use these stats; half-orcs per se don't exist. Very common in Wyrmhold and the Duarchy. Uncommon or rare elsewhere.

Dragonborn (all colors4)
Rare but more common as adventurers. Very common (dominant, in fact) in Wyrmhold. Not found elsewhere. Mostly related to one another (small, clannish population). Add Darkvision (60 ft) and can choose either +2 DEX or +2 STR. Breath weapon is a bonus action.

Tieflings4
Rare, skips generations. They occur everywhere humans are found. Can use any of the published variants except Feral (Winged).

Hobgoblins (Homebrew2)
Either from Wyrmhold or the Windwalker Confederacy. Mistrusted by populations where they're not native. Ignore the lore presented in the book.

Ophidians (Homebrew2)
Humanoids with snake-like influences. Only present in the nations of the Jungle of Fangs. 2nd-class citizens in Asai'ka.

Sher-ka (Homebrew2)
Anthropomorphic cats from Ithemba on the south continent.

Udaaka (Homebrew2)
Winged bird-people from Ithemba on the south continent

If you use the variant race option for applicable races (marked with 4), you may choose an extended background from Player Option--Regional Backgrounds.

Options from "Customizing Your Origin" (TCoE) are not allowed. Use the variant races and backgrounds instead.

[2]: Acceptable alternate stats for these races are found in Volo's Guide to Monsters.

[3]: Acceptable alternate stats for this race are found in Eberron: Rising from the Last War.

[4]: Main stats are found either in the SRD or in the Player Option--Variant Races document.

All PHB and Xanathar's Guide classes and archetypes are allowed. From Tasha's Cauldron of Everything, all archetypes except Stars Druid, all the sorcerer archetypes, and the scribe wizard. Non-elf bladesingers are fine. Note that necromancy (specifically creation of undead) is frowned on strongly. Other UA or homebrew requires permission. Spells from Elemental Evil (pdf), Xanathar's Guide, and Tasha's Cauldron of Everything (except for dream of the blue veil) are allowed.

To learn more about the role of the classes (and their NPC equivalents) in Dreams of Hope, see Classes and Quartus.

Tool uses from Xanathar's Guide are in play, as are downtime rules.

Most citizens of the Federated Nations area speak Common of one dialect or another. This does not include most goblins or orcs not from Wyrmhold. All characters start with proficiency in Common. For Elven, choose either high elven or wood elven. For more information, see Languages of Western Noefra 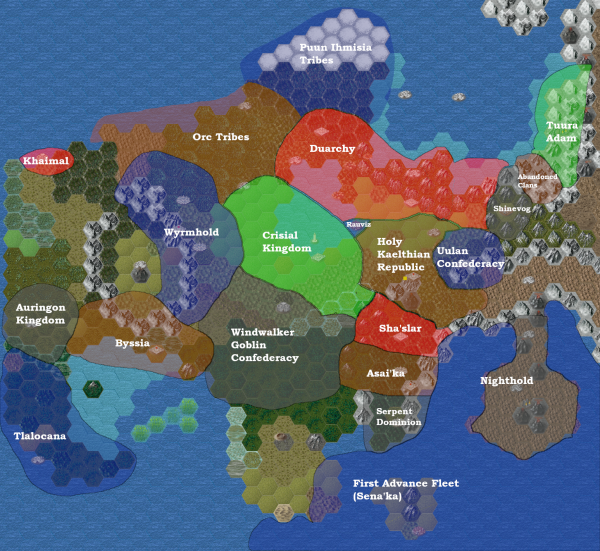