The great range of mountains that separates the Great Rift from the southern half of Soefra, the Riftwall is the tallest, sheerest mountain range on Quartus. With an average height well above 15,000 ft and multiple peaks over 25,000 ft, it is a daunting barrier despite its relative thinness in parts. It ranges from only 40 miles thick (near Exile's Watch) to almost 300 miles thick. On the northern face, it is almost entirely sheer, with single unbroken faces of 5000 to 6000 feet being the norm. The southern side is more gradual, but still very sheer.

Despite this sheerness and inhospitability, the inside of the range is honeycombed with tunnels, caverns, and other inhabited spaces. 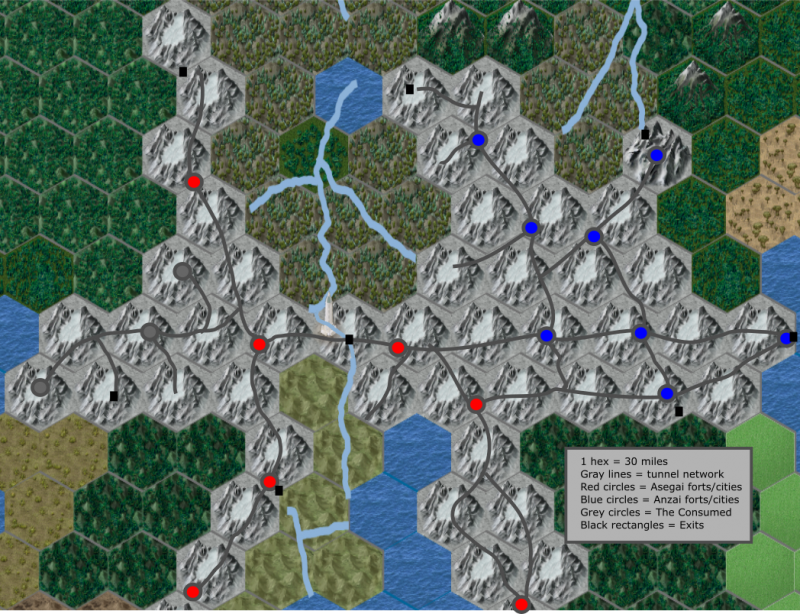 Three main cultures exist under the Riftwall. They are the Anzai, the Asegai, and the Consumed.

The Anzai
not all goroesi were in the area around the Kel'tan capital when the Third Moon fell. Those that lived to the south and survived the separation of Soefra from Noefra chose not to work with the Phoenix Empire and instead claimed the inside of the Riftwall as their own. The Anzai are a proud, matriarchal culture known for worshiping the Dancer in the Dark as well as a spider-like devil named Sek'hoa. They have limited interactions with one small town in South Ithemba, as well as guarded relationships with Two Moons.
The Asegai
those dwarves who ended up in Soefra were few in number, and of a particularly traditional and xenophobic orientation. They are the Asegai. They have taken most of the western portion of the Riftwall, and are rivals to (and frequently at war with) the Anzai. They are being significantly impacted by the rise of the Consumed, who started in the westernmost cities and have progressively moved eastward.
The Consumed
The Consumed started out as an asegai subculture. Oppressed and disaffected, they gave themselves to a comiedai, who through his mkhulu agents has dominated those cities ever since. They are progressively expanding, using their strange mind powers (gained from the comiedai) to infiltrate and take over other asegai settlements. The asegai have blocked the only connection between the Consumed and the rest of the asegai, but tunneling efforts are underway.