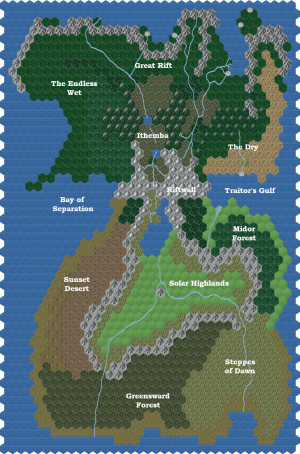 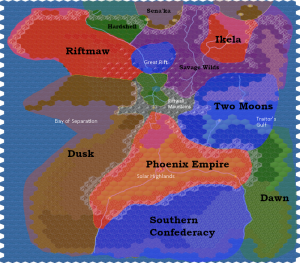 The area north of the Riftwall Mountains is known as the Great Rift. The majority of it is wild jungle inhabited only by primitive tribal groups; the only "civilized" nations there are North and South Ithemba (center, in green and blue), Ikela, Two Moons, and the Sena'ka Ship People (who mainly dwell on the Barrier-Tooth island chain off the top of the map in the Primal Sea). The southern nation of Dusk has colonized the northern shore of the Bay of Separation, but settlements are few and far between in that hostile place. The southern half of the continent is dominated politically by the Phoenix Empire and its Mage-Emperor. Dusk and Dawn are (formally) satrapies, client states of the Phoenix Empire, but act with significant latitude in daily operations. The Southern Confederacy is a recently-formed loose collection of escaped slaves, nomadic tribes, and others who resist entry into the Empire; their independence is only due to the inward-looking decadence of the Empire in the last few generations and they very well know it.

Geographically, the Great Rift is separated from the Empire by the Riftwall--an escarpment reaching nearly 15,000 feet above the floor of the Rift. It's sheer sides daunt any access to the south; only the tunnel known (to the Empire) as Exile's Shame connects the two. Traitor's Gulf and the Bay of Separation complete the "waistline" of the continent. Only the half-elven nation of Two Moons bridges the gap with any frequency. The Empire is situated in the Solar Highlands, a mountain-rimmed high plateau sitting at nearly 4,000 feet above sea level. Strong elemental influences as well as long-standing arcane wards keep the area fertile and comfortable year round.