Established in the ruins of Alkh-Hold after it was reclaimed by the Wild Cards from mkhulu control in 211 AC, Zhapai Karmap is the newest member of the Federated Nations region. Dedicated to freedom, the Wild Hold is one of the most racially-diverse areas in Noefra. It is also one of the smallest, claiming only about 100 sq miles in the Alkh Valley in the Giant Spine Mountains, although the Abandoned city of Dominance (after its liberation) acts as a protectorate. With a total population (as of 250 AC) of only 15,033 in the Alkh Valley itself, it is small but powerful.

The Wild Hold only accepted the Crystal Spire Protocols provisionally, and is considered somewhat of a rogue state by many others (especially the Holy Kaelthian Republic). Very few laws govern behavior--basically don't steal, don't hurt people, don't get caught cheating. Violations are harshly punished, with the death penalty being common and torture for lesser offenses. Many substances considered contraband elsewhere are allowed and even encouraged, as long as you don't get in trouble while using them. ZK has a good relationship with the Abandoned clans, holding military maneuvers (more like semi-organized brawls) every year on the border--a coliseum has been built there to house these fights. 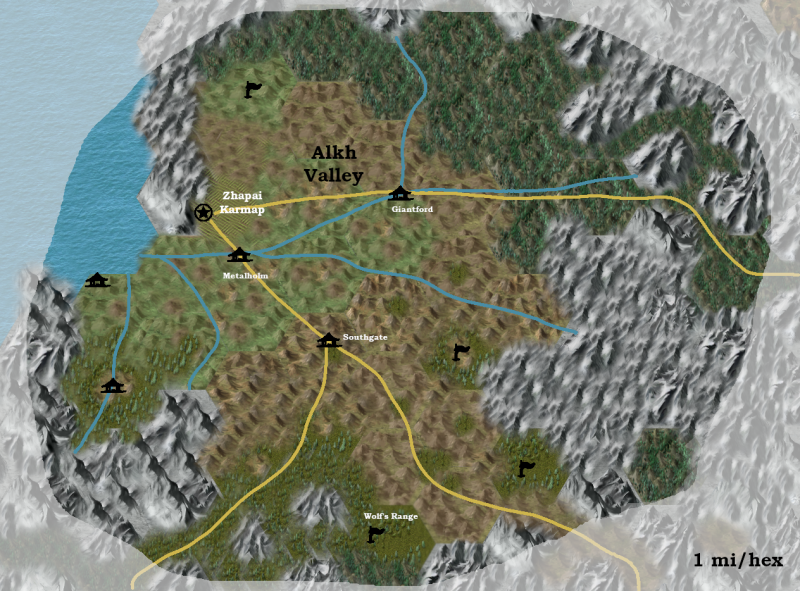 Thon Mountain-break rules the nation, as much as anyone rules a group as fractious and wild as they are. Basically he just smites those that get out of line, if his fellows don't catch them first.

Helwyr runs the First National Bank of ZK, which now has branches throughout Western Noefra. Known for being merciless against anyone who tries to rob it, it's considered the safest place to store money and much international trade is done using promissory notes drawn on the bank.

Oopsie runs the drug trade, when he's not indulging in the product himself. Their major customers are the nobles of Dreamshore, but their products make their way all across the continent.

Uririel Sunia serves as the chief general, as well as works toward becoming more draconic. He's working with Imperial Legacy agents, and has been rumored to even be working with members of the proscribed (everywhere else, that is) Imperial Sons. In between wars and adventures, he keeps himself busy as the nation's excecutioner.

The only company registered in ZK is Delicate Apocalypse, a goblin-run group that specializes in weapon research. Especially weapons that go boom. And anything else that explodes, catches on fire, catches other people on fire, makes loud noises, or is otherwise...fun.